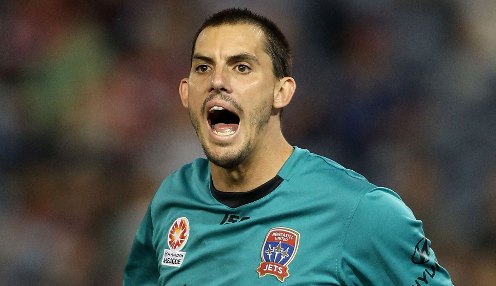 Two wins in 24 games has left Newcastle Jets fans demanding action, but coach Phil Stubbins insists he is the right man to rebuild the club.

The Jets suffered their 14th defeat of the season to remain bottom of the A-League as they lost 2-0 at home to Perth Glory, who are 7.00 to win the Grand Final, on Easter Monday.

Fans unfurled a banner during the half-time break calling for Stubbins, who has been in charge since last May, to be sacked.

The English-born coach, who was previously part of the coaching team at Adelaide United, has faith in his ability to turn the Jets around.

“We are rebuilding the club… We’re trying to do everything we can behind the scenes to build the club and hopefully this time next year we’re in a very strong position,” he said after the Glory defeat.

“We’ve had five years of struggle at the club. We’ve made some changes but ultimately when we get ourselves a squad put together for next pre-season, then we’ll see a different Newcastle Jets take the field.”

Stubbins shrugged off the banner calling for his dismissal, while conceding fans were disgruntled and disappointed.

Gary van Egmond was sacked by the Jets after winning five of the first 15 games last year, and Clayton Zane was overlooked for the job after picking up five victories in the final 12 matches of the campaign as interim coach.

Stubbins went winless in his first 10 games in charge before the Jets beat Adelaide United 2-1 at home in December. After another 10 matches without a win, Newcastle beat Western Sydney Wanderers 2-1 away from home last month but they remain a point behind Wanderers at the foot of the A-League table with 14 points from 24 games.

The coach said: “We’ve been in a lot of games without really getting any return for it. We look forward to the opportunity to gather ourselves and rebuild in such a way that we represent Newcastle in a better fashion.”