Brisbane gunned down by Bulut 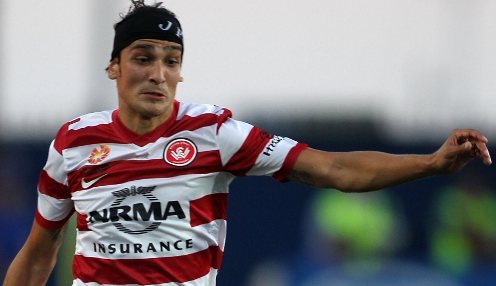 Defender Jerome Polenz labelled Brisbane Roar’s performance “a disgrace” after they lost 4-1 at home to bottom side Western Sydney Wanderers.

Polenz, who played for Wanderers in their Grand Final defeat to the Roar last season, saw his new club put to the sword by Tony Popovic’s team at Suncorp Stadium.

We really have to back ourselves up, we have to analyse everything; we cannot continue to play like that.

It leaves the defending champions needing to beat Melbourne City on Saturday to keep alive their hopes of making the Finals Series.

Before the season began, no-one could have expected that the teams that contested last year’s Grand Final would finish outside the top six this time.

That looks to be on the cards, though, as Brisbane are five points behind City in the chase for sixth spot and have just one game in hand.

German defender Polenz said after the Wanderers defeat: “It’s a disgrace what we showed today. We really have to back ourselves up, we have to analyse everything; we cannot continue to play like that.”

The Roar were without a host of first-choice players due to injuries and national team commitments, and could have been three goals down inside the first 15 minutes.

They managed to hold out until the 20th minute when Nikita Rukavytsya ran onto an excellent cross from Labinot Haliti to beat keeper Jamie Young inside his near post.

Brisbane equalised against the run of play four minutes from half-time when Luke Brattan’s corner was deflected into his own net by Jonathan Aspropotamitis.

But the visitors deservedly reclaimed the lead just before the break as Haliti freed Romeo Castelen on the right and he teed up Kerem Bulut for the first of his two goals.

The finish of the night came from Castelen 13 minutes into the second half, the Dutchman firing in off the underside of the bar after being fed a reverse pass by Yojiro Takahagi.

Bulut broke clear of the defence in the final minute to add to Brisbane’s woes as he tucked the ball inside the near post of exposed keeper Young.

The victory was enough to take Western Sydney off bottom spot and above Newcastle Jets on goal difference.