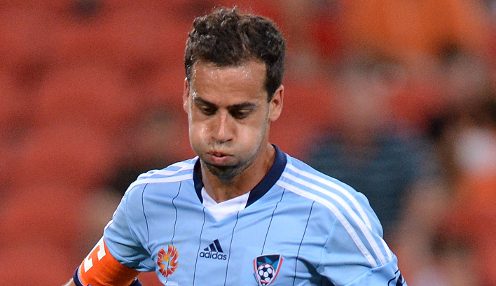 Sydney FC captain Alex Brosque isn’t regarded as a doubt for Sunday’s A-League Grand Final, despite failing to train fully at the start of the week.

Scorer of two goals in the semi-final victory, Brosque returned to training on Wednesday but was limited to just jogging a few laps and stretching.

The rest of Graham Arnold’s squad were put through their paces as the Sky Blues played a full-scale 10 v 10 match.

Brosque will only get one full training session in ahead of the championship decider, when Sydney have a hit-out on Friday before travelling down to Melbourne for the AAMI Park clash.

“It’s nothing serious,” Brosque told the media after Wednesday’s session, adding: “It’s just a bit of stiffness, I guess after 28 games or so it’s expected.

“It’s just a little niggle that’s come up after the last game but because we’ve got the extra day of training this week they gave me the day rest to get it right.”

Sydney FC are 2.20 to be crowned Grand Final champions, with the Victory 1.61.

Though it is overseas marquee Marc Janko’s league-best 16 goals that were the backbone of Sydney’s success this season, Brosque’s recent form marks him out as just as much of a threat on Sunday.

He has scored doubles in three of his last four games, including netting just before and just after half-time in their semi-final win against United.

Brosque said: “The past couple of weeks and having scored a few goals, all that does give me confidence to go out and try things that I probably wouldn’t if I wasn’t as confident.”