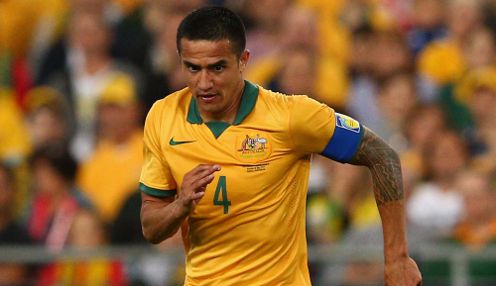 Tim Cahill may be unlikely to play in a fourth consecutive World Cup in 2018, but he’s delighted to be in at the start as the Socceroos begin their qualifying campaign in Kyrgyzstan.

The 38-year-old admits there was a time when he doubted he would be involved at last year’s tournament in Brazil, or the Asian Cup on home soil earlier this year. So he’s not about to predict that he will get the chance to join an exclusive club in three years’ time.

Cahill, now playing with Chinese club Shanghai Shenhua, has found the net at every tournament since 2006 and is now Australia’s all-time record scorer.

In Bishkek with the Socceroos, he stresses that the team can’t afford to treat the opposition lightly even they are 177th in the FIFA rankings.

“The only way we can lose this game is through our own performance,” said Cahill. “We can’t have any half measures because the game is going to need a high level of intensity.”

The striker says it’s too far away to consider his prospects of still being in the team at the age of 41, adding: “For me I’m enjoying my football. I see it as an exciting task and something I want to be a part of for as long as possible.

“Brazil was one of the best moments of my life, as was 2006 and 2010, and now this is probably going to be up there with one of the hardest qualifying campaigns I’ve been involved in. It’s just another test.”