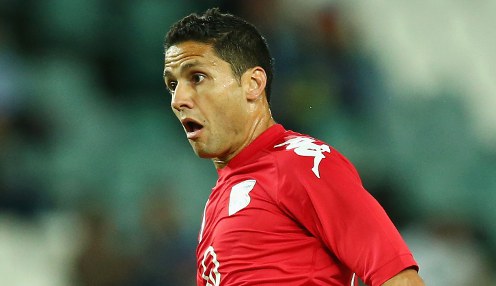 Adelaide United will be without Marcelo Carrusca for up to three weeks after the playmaker suffered a quad injury in the 1-0 win away to Newcastle Jets.

Carrusca netted the only goal of the game in the first half at Hunter Stadium before limping off just before half-time.

Nigel Boogaard’s final visit to the stadium as a United player before he moves to the Jets in the off-season ended badly for the defender.

He fell on his head after challenging for a high ball and was stretchered off with his neck in a brace.

That left the visitors down to ten men for the final 18 minutes, as coach Josep Gombau had already made all his three substitutions, but United were able to hold on for a victory that means the A-League table is amazingly tight with four rounds to go.

Adelaide are still fifth on 40 points, with three teams above them all locked on 41 and leaders Wellington just a point ahead.

Newcastle were unlucky not to get something out of the game as they sought revenge for a 7-0 thrashing at the hands of the Reds in January.

They were denied in the first half when Mitch Cooper’s shot was cleared off the line by the outstretched boot of defender Dylan McGowan, and in the second half Edson Montano hit the post from close range.

United scored the only goal after 28 minutes, Isaias’ chipped ball over the top sending Sergio Cirio in on goal. His shot was blocked by keeper Ben Kennedy but fell invitingly for Carrusca to fire home.

Gombau said of the Argentinian’s injury: “We have to do a scan but he is a player that knows very well his body.

“He told me he felt he broke a little bit, normally this is two or three weeks. It will be difficult, but this is a team.”