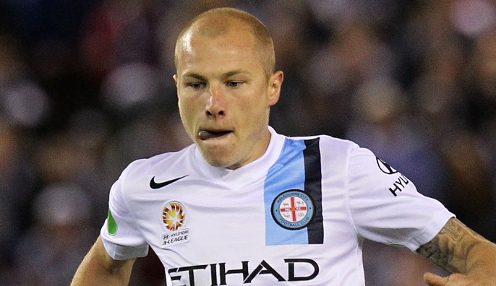 A second defeat in four days left Melbourne City with a tougher task to get back into the A-League top six and coach John van ‘t Schip unhappy with his team’s discipline.

Defender Connor Chapman was in the spotlight in their 3-2 defeat away to Western Sydney, conceding a 79th-minute penalty and soon afterwards being sent off for making contact with referee Strebre Delovski.

In the end it’s just not good enough. We lose our head in some situations.

Delovski was well placed to spot Chapman’s push on Tomi Juric, awarding the spot-kick that the Socceroos striker netted to bring his side back level at 2-2.

City had looked well placed going into last weekend’s clash with Central Coast Mariners, as they embarked on a run of three straight games against the bottom three teams.

Having lost the first two of those matches, it leaves van ‘t Schip’s side a point behind Brisbane Roar in the chase for the all-important sixth spot that would earn a Finals Series place. More importantly, Brisbane have two games in hand, as well as a goal difference that is six better than City’s.

Van ‘t Schip felt the penalty decision was “soft”, but conceded: “[Delovski] gave it, he was on top of it so he probably saw something that for him was clearly a penalty.”

Speaking of Chapman’s dismissal, he added: “I asked Connor and he said there might have been contact. After that [down to 10-men] it’s difficult.

“In the end it’s just not good enough. We lose our head in some situations, the pressure knowing that you have to win this game and it ended up on the wrong side.”

Former Wanderers star Aaron Mooy ended up on the losing side on his return with City but put in an excellent performance. He set up the first goal for Safuwan Baharudin with a superb cross and his curling free-kick 19 minutes from time put the visitors 2-1 up.