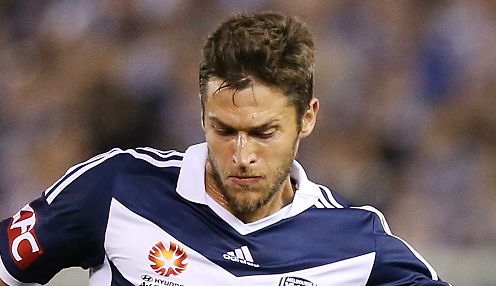 Matthieu Delpierre has signed a new deal with Victory.

His decision to extend his contract into next season comes just a week after the re-signing of another overseas marquee, Tunisian Fahid Ben Khalfallah.

The Frenchman, who won the Bundesliga title with VfB Stuttgart in 2006-07, has played a big part in the club’s success this season.

Going into his first full campaign in charge of Victory, coach Kevin Muscat backed Delpierre to help improve his back line – Victory finished fourth last season but conceded 43 goals which was more than every other team bar Wellington Phoenix.

This time around, their goals against tally was 31, which was the best in the league.

Delpierre’s season was interrupted by injury in October but he has played the past 10 games in a row as Victory secured the six wins that earned them the Premier’s Plate.

Muscat’s side, who were second behind Wellington Phoenix with five games to go, conceded just two goals in those remaining matches.

Delpierre said: “Everyone at Melbourne Victory has made me and my family feel so much at home and comfortable here in Melbourne so I really wanted to stay and continue to play here.”

The 34-year-old added: “The coaches, support staff and administration are all heading in the one direction so the future is very exciting at this club and I want to be a part of it.”

Victory football operations manager Paul Trimboli said: “Matthieu has been in superb form since his return from injury and is an important player to our style and structure moving forward. He is a player that we have been working hard to retain and the club is delighted we could come to an agreement for another season.”

Meanwhile, Wellington Phoenix are 2.10 to win their play-off clash with Melbourne City on Sunday.