Djite in battle to make semi 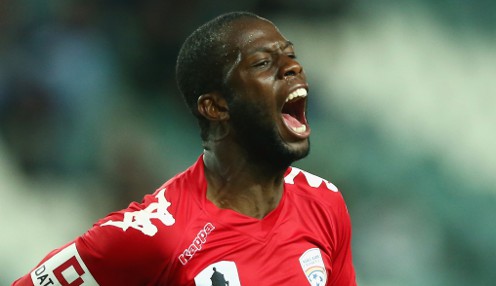 Bruce Djite is a doubt for Adelaide’s semi final meeting with Sydney.

Adelaide United are hopeful striker Bruce Djite can shrug off a groin problem to play in Saturday’s semi-final against Sydney FC.

Winger Craig Goodwin reckons Djite has a good chance of winning his fitness race, and the player himself had said in the lead-up to the Roar clash that a few more days should see him come right.

While Djite continues to be a doubt for the game with the Sky Blues, Adelaide have played down reports that key midfielder James Jeggo would miss the semi-final.

Jeggo limped out of Tuesday’s training session after taking a knock to the ankle.

I’m pretty sure Bruce will be right to play in the game.

A club official said he had left the session purely as a precaution, and was on course to play at Allianz Stadium where United are 3.20.

Even if Djite is passed fit, it is likely he would be on the bench for Joseph Gombau’s side, who are 5.00 to win the Grand Final.

Goodwin said of the striker, who has been training on his own so far this week: “I’m pretty sure Bruce will be right to play in the game. As to how many minutes it’s up to the coach and Bruce as to how much he can get through but I’d say he’s a good chance.”

Goodwin added: “He’s that player that can hold the ball up and bring other players into the game.

“A lot of people are critical and think he should score more but the amount of work he does off the ball and bringing other players into the game and allowing them to score is amazing.”

Adelaide have won three times at Allianz Stadium against the Sky Blues this season, twice in the league and once on the way to their FFA Cup win.