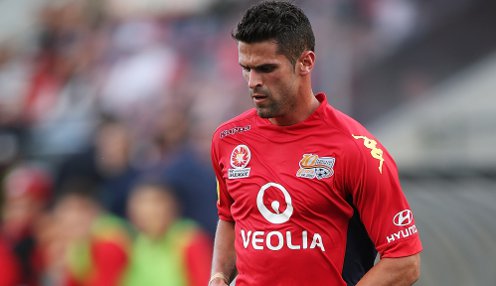 Fabio Ferreira moved from Adelaide to Central Coast during the transfer window.

Moss had a “gentleman’s agreement” with his opposite number Josep Gombau that he would not pick the Portuguese player in either of the two meetings between the sides over the rest of the season.

Ferreira joined the Mariners during the transfer window, a day after being released by United.

He sat out Central Coast’s 2-1 win in Gosford last month, but Mariners executive chairman Peter Storrie says his club won’t be honouring the deal between Moss and Gombau.

I’m very happy with my performance and happy to help the team as well.

Ferreira, who played 51 games for the Reds, will play at Coopers Stadium against his former club.

Storrie said: “There should be no such agreements on permanent transfers. I can understand a gentleman’s agreement in relation to a loan deal which this is certainly not.”

Ferreira, who signed a two-year deal with the Mariners, has scored three goals in his first four games with the club including the winner in last weekend’s 1-0 victory against Melbourne City.

“I’m very happy with my performance and happy to help the team as well. That’s why I’m here to play and to play well and show what I can do,” said the former Portugal U-19 international.

Beating Adelaide is imperative for the Mariners, who are six points outside the Finals Series places and have played two games more than sixth-placed Brisbane Roar.