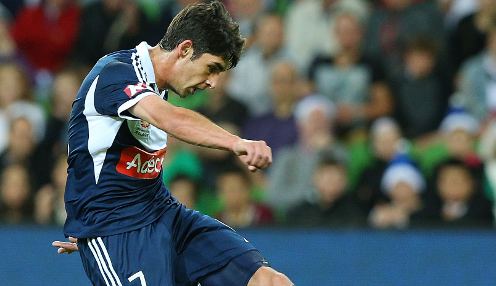 Two precise finishes from Brazilian Gui Finkler gave Melbourne Victory a 2-1 win over Central Coast Mariners that took them to within a point of leaders Wellington Phoenix.

Kevin Muscat’s side were off their game at AAMI Park but were still good enough to come from behind to secure the points against a Mariners side who are now all-but mathematically out of finals contention.

Victory’s lowest crowd of the season, just 18,205, was in keeping with the quality of the match and the second-string nature of their team. Muscat was deprived of six players through international duty and had Kosta Barbarouses out injured.

Isaka Cernak only scored twice for Victory during the two years he spent with them, but he showed their fans he knows where the goal is as he broke the deadlock just after the half-hour mark.

Nick Fitzgerald’s header was well saved by keeper Nathan Coe, but when the ball was parried across goal Cernak nipped in front of defender Mathieu Delpierre to head the visitors in front.

Victory equalised eight minutes later when Archie Thompson took the ball off Fitzgerald and set up Finkler for a superb curling shot that beat keeper Liam Reddy and went in off the inside of the post.

Finkler won it for the home side on 78 minutes with a similar strike, again curling the ball with his right foot past the Mariners keeper.

Tunisian Fahid Ben Khalfallah was denied what might have been goal of the season in the first half when he dribbled past four players only to fire into the side-netting.

The win means Victory are now unbeaten in their last six home games against Central Coast.

Melbourne Victory are 3.00 to win their next match against Wellington Phoenix, who are 2.30 with the draw 3.40.