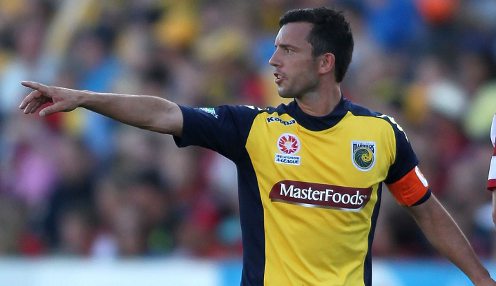 Central Coast Mariners skipper John Hutchinson aims to bow out on a winning note when he finishes his 19-year career with the away trip to Melbourne Victory on Sunday.

Hutchinson will hang up his boots after the final match of the season, which will be his record-breaking 228th A-League match.

There is nothing riding on the game for the Mariners, who are out of contention for the Finals Series, but for Hutchinson, who has been assistant coach to Tony Walmsley since the Gosford club sacked Phil Moss last month, it will be an emotional game.

“I’m excited about the future, beyond playing, but I’m nervous about the end of my playing career. You never want it to end,” he said. “After last weekend’s game against Wellington I was feeling a bit emotional about it coming to an end, one more game.”

The champagne corks may well be popping at AAMI Park on Sunday, but in the opposition’s dressing room – Victory know that even if Wellington Phoenix beat Sydney FC on the same day, all they need do is avoid defeat to Central Coast to secure the Premier’s Plate. Victory are 2.50 to win the Grand Final.

Hutchinson, who hails from Victoria, said: “Going back home to where I was born to play my last game, with my mum and dad and friends watching, it’s going to be emotional. I’m looking forward to it and hopefully the boys are up for it and we can put in a good performance.”

The 35-year-old’s club highlight came when he captained the Mariners to their Grand Final win two years ago and he will stay on at the club in a coaching capacity next year, working alongside Walmsley.

The Mariners, who are 8.00 to beat Victory and 5.25 to secure a draw, are without keeper Liam Reddy for the finale after he was suspended for two games for elbowing Wellington’s Louis Fenton.