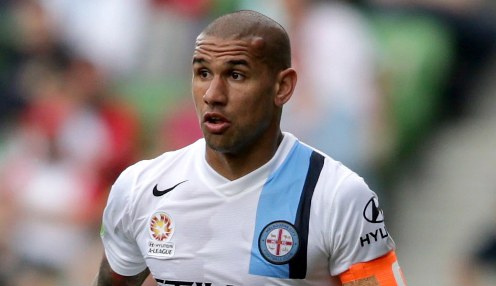 Kew Jaliens came back to haunt the club that released him two months ago as Melbourne City brushed off Newcastle Jets 4-0 at AAMI Park.

The former Jets skipper, one of five players released on the same day by coach Phil Stubbins, scored the opening goal as City preserved their chances of making the Finals Series.

Newcastle failed to muster a shot on goal in the match and are now just one game away from equalling their club record of 11 without a win.

Jaliens netted the opener on 18 minutes when he was left unmarked seven yards out and able to sweep the ball home from Aaron Mooy’s corner.

The home side had to wait until two minutes after the interval to double their lead, when new signing Harry Novillo scored his first goal for the club. The Jets gave the ball away on the edge of their area and though Robert Koren was unable to convert the chance the loose ball fell to Novillo who found the corner of the net.

Koren’s intelligent through-ball set up substitute David Williams for the third goal on 63 minutes, Williams guiding the ball past Ben Kennedy for his first goal since November.

Iain Ramsay also came off the bench to score, taking a pass from Mooy and sending a first-time shot in off the base of the post.

It was a bitter pill for Jets coach Stubbins to swallow when Jaliens broke the deadlock against his side.

“Kew’s been a player at a good level for a long period of time. Things have moved on and he’s here now,” he said.

“He’s at a club with a fair array of talent amongst their stocks. There’s no animosity towards Kew at all.”

Melbourne City are 4.00 to beat Sydney FC on Friday and 26.00 to win the A-League Grand Final outright.