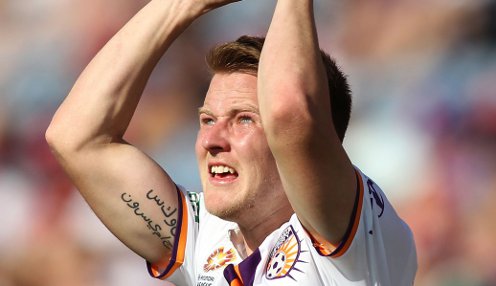 Defender Scott Jamieson believes moving to Western Sydney Wanderers will give him the chance for some overdue success.

Jamieson has clocked up 153 A-League games in a career that has so far taken him to Adelaide United, Sydney FC and Perth Glory.

I have no doubt at all that the club is ready to regroup for a title challenge.

He left the Glory at the end of last season, having been part of a squad that missed out on the Finals Series due to an FFA ban for breaching the salary cap.

The four-cap Socceroo has moved from a club that topped the A-League for most of last season to one that finished next to bottom, with just four wins in the campaign.

But he feels Wanderers coach Tony Popovic has the ability to bring success back to Wanderers, particularly now the club can concentrate on the league in the new season rather than contend with another long Asian Champions League season.

The 26-year-old worked briefly under Popovic at Sydney FC in 2010, and said he saw then what an outstanding coach he would become.

“I have no doubt at all that the club is ready to regroup for a title challenge, because he’s the kind of coach that is always wanting success and he knows how to get it,” added Jamieson.

“I’m in a space where I want to win things and, apart from the early years at Adelaide, I haven’t had nearly as much success as I would have liked. I’m coming here to win something.”

Jamieson says the people in charge at Western Sydney, who are 13.00 to win the 2015-16 Grand Final, and the backing they have from supporters means the club’s foundations are solid.

Disappointed at the way the season ended, Jamieson says it was not just the salary cap issue that persuaded him it was time to move on.

But he added: “I can at least say that through all the salary cap dramas, I ended up taking on a leadership role and developed some new skills which I plan take to Western Sydney.”