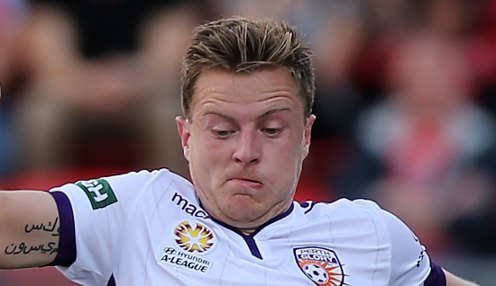 Perth’s season ended in disarray, with the club fined and banned from the finals for breaching the salary cap.

Jamieson is one of a group of players who sought to leave Glory in the wake of their salary cap woes, and is the fifth to be released by the club, who are 13.00 to win the 2015-16 Grand Final.

The 26-year-old signed a new deal in January that took him to the end of the 2016-17 season, with an option of a third year.

But Glory have agreed to release the four-cap Socceroo, bringing to an end his three-year stint in Perth.

Jamieson played 56 times for Kenny Lowe’s side, having previously had spells in the A-League with Adelaide United and Sydney FC. He brought up his 150th game in the league last season, and featured in Perth’s FFA Cup final defeat to Adelaide.

Reports suggest Western Sydney Wanderers, who have parted company with 11 players since the end of last season, are interested in signing Jamieson.

Perth said in a statement: “The club would like to thank Scott Jamieson for his contribution and wishes him every success, going forward.”

Another player who is trying to secure an early release from his deal, striker Jamie Maclaren, has issued the club with a breach notice though Glory are fighting to retain his services.

Vukovic, who cited family reasons for wanting to head back to the east coast, is said to be a target for Western Sydney and champions Melbourne Victory.

Meanwhile, Sydney FC are 6.00 to win their friendly against Tottenham on Saturday, with Spurs 1.44 and the draw 4.75.