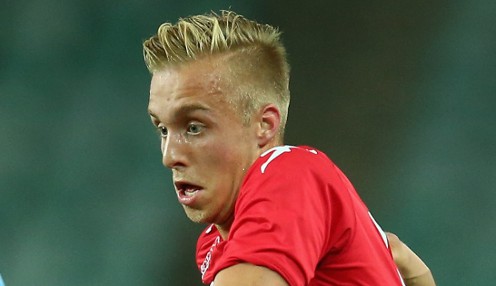 A first win in five meetings with Melbourne Victory would set Adelaide United up well for the A-League finals, says James Jeggo.

Every point is of huge significance in the final six rounds of the season, with the top five teams separated by just three points.

As well as the Premier’s Plate, there are two spots in the Asian Champions League up for grabs and no team will want to miss out on the top four and have to play an away game in the finals.

“Whoever takes the three points is going to have a real jump on the table and the rivalry does add to the match,” said midfielder Jeggo.

“It has the whole package – there’s a lot of good, individual players on the pitch and both back fours are going to have their hands full so it should be a fascinating match for the neutral.”

Jeggo, who played 30 games for Victory before joining the Reds last May, said: “There’s that little bit extra in this match, the atmosphere it brings and the quality of the players, you just know it’s going to be a special occasion.”

The 23-year-old says Adelaide, who are just a point behind Kevin Muscat’s side going into the Coopers Stadium clash, are prepared to deal with Victory’s counter-attacking strategy.

Their failure to win either of the previous meetings this season was down to a lack of concentration across the full 90 minutes, he feels.

The Reds scored two own goals away to Victory in a 3-2 defeat in November. They switched off after Sergio Cirio had given them a lead in the home meeting in Round 2 and allowed Fahid Ben Khalfallah to equalise with a minute left in a 1-1 draw.

Meanwhile, Adelaide have re-signed versatile 24-year-old Osama Malik on a two-year contract. Malik has played 94 games for the club in midfield and defence, and helped them win the FFA Cup in December.