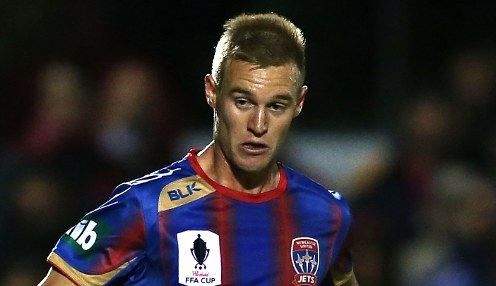 Coach Tony Popovic is undertaking a radical overhaul of his squad for the 2015-16 campaign, with 13 players having left the club.

Wanderers are one of the biggest clubs in Australia and Tony Popovic is one of the best coaches.

Until this week, former Perth Glory favourite Scott Jamieson had been the only newcomer to the club, but Popovic has completed the signings of the ex-Jets pair in the space of 24 hours.

Neville has spent the past three years at Hunter Stadium, racking up more than a century of A-League appearances so far with Perth and Newcastle.

Pepper has spent all his career with the Jets until now, graduating from their youth team and going on to play 54 senior games.

Neville said he believed he would improve as a player with Western Sydney, adding: “The whole club in general is a massive attraction. Wanderers are one of the biggest clubs in Australia and Tony Popovic is one of the best coaches – he is someone I want to work under.”

The 26-year old was born in the UK and had trials with Portsmouth and Sheffield Wednesday while he was with the Jets and Pompey are 5.00 to win the League Two title in 2015-16.

Pepper is coming off his best season to date, having started 16 games last term.

He said: “I’ve seen how much the Wanderers have grown since formation and the type of club that they’ve become, that’s a factor in me signing – I’m excited to join the hype.”

Meanwhile, Newcastle have confirmed that former Socceroo David Carney is staying with them for next season.

Carney was one of the players former coach Phil Stubbins axed earlier this year, but he remained with the team after failing to agree terms for his release.

The 31-year-old remained on the books but not even used on the bench by Stubbins. However, with the Jets having been taken over by Football Federation Australia he stay for the final season of his two-year contract.