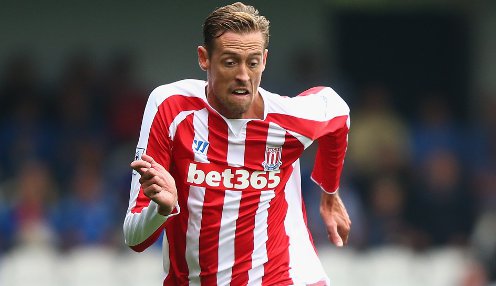 Tinkler, who has re-affirmed his commitment to the struggling A-League club, has opened negotiations with the Stoke City player’s agent.

I’ve spoken to Emile and he’s keen to help if he can; we’ll see what happens.

Crouch is out of contract with Mark Hughes’ side at the end of this season, and Tinkler believes he has a chance of recruiting him if the 34-year-old doesn’t receive an offer to play in the Premier League next season.

The Jets brought another former England striker, Emile Heskey, to the club for a two-year spell and Heskey – now with Bolton Wanderers – is reported to be helping them sign a world-class marquee striker for the 2015-16 campaign.

Tinkler said: “I’ve spoken to Crouch’s management and we’re trying to talk him into coming out to Australia with his family for a playing stint at the Jets. I’ve spoken to Emile and he’s keen to help if he can; we’ll see what happens.”

Crouch, who scored 22 goals in his 42 games for England, has played regularly for Stoke during his four-year contract at the Britannia Stadium.

He needs one more goal this season to reach double figures for the third time in a campaign with the Potters, having netted 41 in his 150 games overall.

Tinkler, whose side look destined to finish with the wooden spoon at the end of the A-League season, said the Jets’ chances of snaring a player like Crouch were “probably 50:50 at this stage.”

He added: “I’m in there doing my best; whether he lands another EPL contract will have a big bearing on it obviously. His management hasn’t said he is not interested.”

Newcastle face Brisbane Roar, who are 17.00 to win the Grand Final, in their final game of the season on Friday.