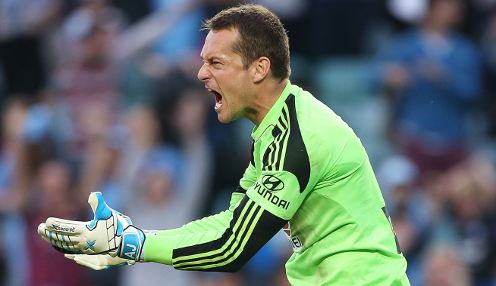 Wellington Phoenix goalkeeper Glen Moss is hopeful of winning his fitness battle ahead of the elimination final against Melbourne City on Sunday.

The New Zealand international missed last weekend’s 2-1 home defeat to Sydney FC after picking up a knee strain in training.

I’ve got a few more days before the game, so it’s only going to improve.

Coach Ernie Merrick is crossing his fingers Moss will be passed fit for the Westpac Stadium clash, with defender Ben Sigmund set to keep his place despite missing training on Wednesday.

Merrick said Sigmund had the flu and was told to stay away from the rest of the squad to avoid the chances of passing it on.

The Phoenix are well aware of the importance of having Moss, who trained on his own on Wednesday, between the sticks. Lewis Italiano was called up for his debut against the Sky Blues and failed to keep out a Shane Smeltz penalty that was virtually hit straight at him.

Moss said: “I’ve got a few more days before the game, so it’s only going to improve. I just kind of twisted badly on it and there were a couple of days of swelling and I kind of wanted to play it safe.

“It wasn’t going to be 100 per cent game, so it was better to sit it out and I’m glad I did because it’s come really good now.”

Wellington would have avoided the first week of the finals and secured a home semi-final if they had beaten Sydney last weekend.

As it is, they know they will face a trip to Melbourne Victory in the semi-final if they get past City on Sunday, with Wellington 8.00 to win the Grand Final.

The Phoenix have a good record against John van ‘t Schip’s side – they are undefeated in the past ten meetings and beat them 5-1 at home earlier in the season.