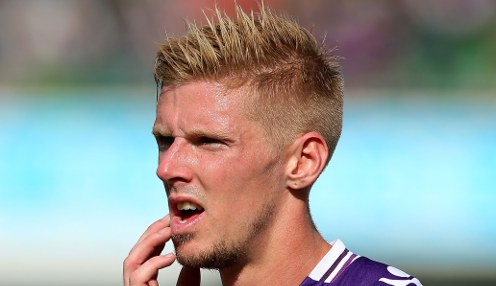 Perth Glory are on the verge of losing another top player, with Andy Keogh set to move overseas.

It will be a big blow to the club, whose fortunes have dipped markedly since they were charged and subsequently penalised for salary cap breaches.

After being suspended from the A-League finals and placed seventh on the final league table, Perth told all their contracted players they were free to find new clubs.

After several talks with Keogh and his management the club decided not to stand in his way, subject to Perth Glory being compensated.

Ireland international striker Keogh, who was one of the Glory’s outstanding players last season, was granted extended leave and has not returned to pre-season training.

He has been in negotiation with an overseas club, believed to be Thai Premier League side Ratchaburi, and Perth are finalising terms for his transfer.

Keogh has one year left on his contract, with an option for a further year. But a statement from the Glory, who are 13.00 to win the Grand Final, said the offer the striker had been made was too high for them to compete with.

The statement added: “Perth Glory exhausted every avenue to resolve certain terms and conditions relating to Keogh’s contract from last year and offered him a new and transparent deal that did not breach the salary cap.

“After several talks with Keogh and his management the club decided not to stand in his way, subject to Perth Glory being compensated.”

Keogh played in all of Perth’s 27 games last season and scored 12 goals, including a hat-trick in the 3-2 win over defending champions Brisbane Roar last October.

The 29-year-old will become the sixth player to leave Perth since the end of last season, with experienced keeper Danny Vukovic, striker Jamie Maclaren and left-sided specialist Scott Jamieson among them.

Glory’s statement said: “The club would like to assure its members and fans that it is in talks with a number of strikers and hopes to make an announcement within the coming weeks.”