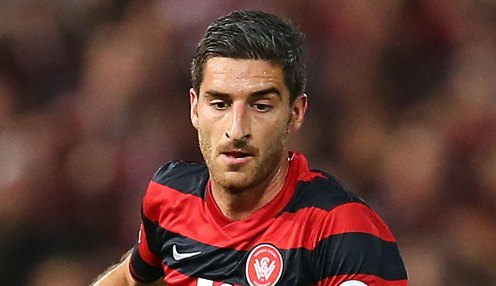 Iacopo La Rocca believes his move to Adelaide United will bring back his enjoyment of playing, after a tough time at Western Sydney Wanderers.

The Italian hardman is one of 14 players to have been released by Western Sydney since the end of last season. Tony Popovic’s side only just avoided the wooden spoon in the A-League in their third campaign, having reached the Grand Final in their first two seasons.

They won the Asian Champions League final in November, becoming the first Australian side to lift the trophy, but they only won three league games all season and La Rocca said playing ceased to be enjoyable.

The last five months at the Wanderers were not fun anymore.

He has signed a two-year deal with United, who are 7.00 to win the Grand Final, and is looking forward to starting pre-season with them next week.

“The last five months at the Wanderers were not fun anymore,” said the Rome-born defensive midfielder. “With all that was happening with the club after winning the Champions League I did not enjoy playing the games or the training.”

The 31-year-old started both legs of the Asian Champions League final against Al-Hilal and enjoyed a career highlight the following month when he scored against Mexican side Cruz Azul in the FIFA Club World Cup.

He played 58 times over three seasons for Wanderers, scoring six goals, and admits his release came as a surprise.

La Rocca added: “Fortunately there was some interest from other clubs in the A-League and when I received calls from the Adelaide coach (Josep Gombau) and sporting director (Michael Petrillo) I was more than happy to sign for the Reds for two seasons because many believe they play the best football in Australia.

“So in a way the move was the best thing that could happen to me.”

La Rocca is set to make his debut in the Reds’ FFA Cup Round of 32 clash away to Darwin Olympic.

Adelaide are 2.50 to win their first A-League game of the season against Melbourne Victory, who are 2.50 with the draw 3.40.