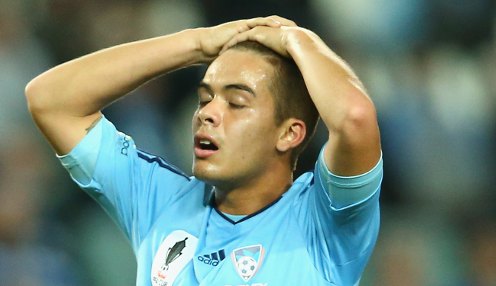 Hagi Gligor is among the new arrivals at Perth Glory in the off-season.

The Glory led the A-League table for most of the season before their form tailed away, and they then missed the finals after being suspended for breaching the salary cap.

Seven key players have left since then, leaving Lowe with just 17 in his squad.

He aims to bring in as many as five more new recruits before the start of the campaign, with former Western Sydney Wanderers goalkeeper Ante Covic reported to be about to sign.

This year you are hoping just to build on what we did last year.

Perth, who are 13.00 to win the A-League grand final, have just over a month to prepare for their opening game of the season, against Newcastle Jets in the FFA Cup round of 32.

Lowe said he had no control over the events off the field that led to them sitting out this year’s finals, and hoped the club could build on the success they had had up to that point.

“I think the same as last year; we came in with a new wave of optimism and this year you are hoping just to build on what we did last year,” said the coach.

“Unfortunately maybe we slip back a little bit, we have to maybe take a couple of steps back and then we’ll move forward again.

“If we can blag it, and finish a bit higher than we finished last year, we’ll have a good year. But there’s no pressure, there’s no stress.”

Among the players to have arrived at the club so far this off-season are former Sydney FC midfielder Hagi Gligor, defender Alex Grant and former Young Socceroos keeper Jerrad Tyson.