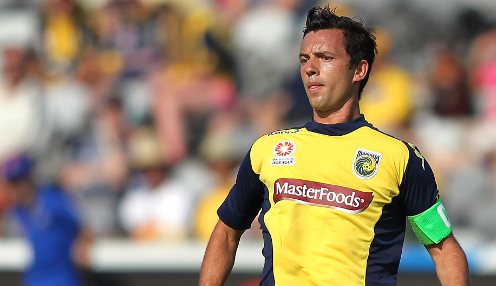 John Hutchinson will make his final home appearance for the Mariners on Saturday.

Defender Storm Roux hopes Central Coast Mariners can give captain John Hutchinson a fitting send-off in the final home appearance of his career on Saturday.

The Mariners stalwart, who has been with the club since the inaugural A-League campaign, will hang up his boots at the end of the season.

Hutchinson will bow out as the A-League’s all-time leader in appearances – if he plays in the remaining three games of the campaign he will finish on 228 games.

It’s been amazing playing with him. He’s a great leader, great player and a top bloke and I’ve learned a lot from him.

The former Malta international is staying on at the Gosford club as an assistant coach next season, a role he has combined with his playing duties since Phil Moss was sacked as head coach last month.

Roux has called on Mariners fans to turn out in numbers at Central Coast Stadium for the final home game of the campaign against Asian Champions League winners Western Sydney Wanderers.

“Hopefully we get a big crowd down at the game for Hutchy,” said the New Zealand international. “He’s been an incredible servant for the club over all these years.

“It’s been amazing playing with him. He’s a great leader, great player and a top bloke and I’ve learned a lot from him.”

Mariners fans have had little to cheer this season – the club who won the Grand Final in 2013 and finished third in the table last year have only won four of their 24 games.

They are in need of a boost after being thrashed 6-1 away to Brisbane Roar last weekend.

“It’s been a difficult season, obviously with a lot of changes and not winning matches,” said Roux. “I think it’s been hard for a lot of us. With the top six out of touch now we need to finish the season off well for our fans and then focus on a good pre-season and making sure we can do better.”

The Mariners are 4.33 to beat Western Sydney by a one-goal margin.