Mariners score in Nick of time 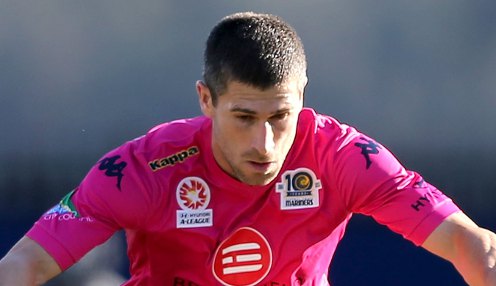 Perth managed to hold onto top spot in the league until last weekend, but having now not won since 2nd January even their ability to finish in the top four is in serious doubt.

The visitors conjured up a trademark goal from a set-piece when Jamie Maclaren put them ahead with 11 minutes left.

It was no more than the Mariners deserved, though, when in the second minute of injury time Montgomery latched onto a clearance attempt and cracked the ball past keeper Jack Duncan from all of 25 yards.

Though it won’t be enough to rescue their Finals Series hopes – they are now 10 points behind sixth-placed Melbourne City with five games left – the Mariners’ display in their penultimate home game of the season will have encouraged fans and interim coach Tony Walmsley.

The Gosford side were desperately unlucky not to score in the first half, Nick Fitzgerald nipping in ahead of defender Dino Djulbic and beating Duncan with his shot only to see it strike the post.

Perth were also denied by the woodwork before going ahead, when Nebojsa Marinkovic saw his shot tipped onto the crossbar by keeper Liam Reddy.

They scored a 14th set-piece goal of the campaign when Maclaren guided his header home from Marinkovic’s out-swinging corner. It was the substitute’s fifth goal off the bench this season.

It was their 13th goal of the season to come in the last 15 minutes of a game, but did not prove enough to break their drought.