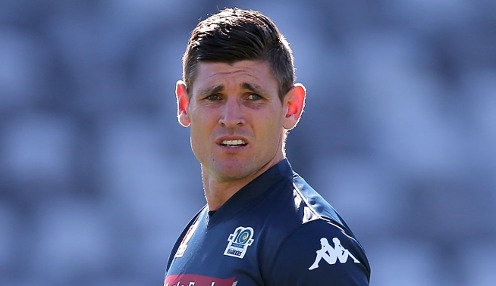 The Mariners are looking to pinch an A-League play-off spot this season.

Central Coast Mariners aren’t ready to give up on their hopes of sneaking into the A-League finals, says interim coach Tony Walmsley.

The former Sheffield United academy recruiter enjoyed a winning start to his temporary tenure when the Mariners beat Melbourne City 1-0 in Gosford.

It will be a tall order for them to continue their four-season run of making the top six. They are six points behind Brisbane Roar, the team they need to catch, having played two more matches.

I’m a glass half full guy and an eternal optimist so why not?

The Mariners’ run-in is tough as they have to play premiership-chasing Melbourne Victory twice away from home in their final seven matches and will take on leaders Perth Glory in a fortnight.

Walmsley, though, whose side travel to Premier’s Plate contenders Adelaide on Thursday, is upbeat about the prospects for the rest of the campaign. The Mariners are 8.00 to finish in the top six.

Asked whether he felt the club could still make the Finals Series, he said: “I’d like to think so. I’m a glass half full guy and an eternal optimist so why not?

“Adelaide are in a bit of a slump. I don’t want to fuel their fire but we’re going to go to down to Adelaide with a short turnaround and to try and win the game.”

Walmsley, who is in charge until the end of the season and will then revert to being the club’s technical director, added: “I told the boys yesterday, ‘I already know when my end’s up, it’s in eight weeks from now unless we make the finals I might get an extra couple of games in’ and that would be nice.”

Fabio Ferreira netted the winner for the home side in the second half, but Walmsley felt the way the team had defended under pressure before the break had done just as much to earn the victory.