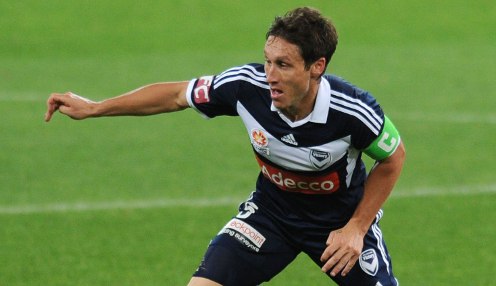 The defensive midfielder had a clause in his contract with Victory allowing him to move on if the club received a $1 million offer and he will officially join Baniyas when the league’s transfer window opens on 15th July.

The offer from Baniyas presents a significant opportunity for Mark and his family that he would like to pursue.

Milligan’s move has been in the pipeline for several weeks and he flew to the UAE late last month to discuss personal terms.

The 29-year-old Socceroo is set to sign a two-year deal with Baniyas, which Victory coach Kevin Muscat said was too good an opportunity to turn down.

“Mark has been a wonderful servant for Melbourne Victory who has led by example at every opportunity,” said Muscat.

“The offer from Baniyas presents a significant opportunity for Mark and his family that he would like to pursue. We wish Mark all the very best for the future and thank him for his service to the club.”

Milligan has had a dream first six months of 2015, helping Australia win the Asian Cup for the first time and captaining Victory to the premiership-championship double.

He won the Victory Medal as the club’s player of the year in 2012-13 and the Joe Marston Medal as man of the match in this year’s 3-0 Grand Final win over Sydney FC.

Milligan played 75 A-League games over four seasons for Victory, who are 3.75 to win the Grand Final next season, with Melbourne City 9.00 and Sydney FC 5.00.

He won the Grand Final with Sydney FC in 2005-06, then after a season with Newcastle Jets he moved abroad for the first time, playing with Shanghai Shenhua and JEF United Chiba.