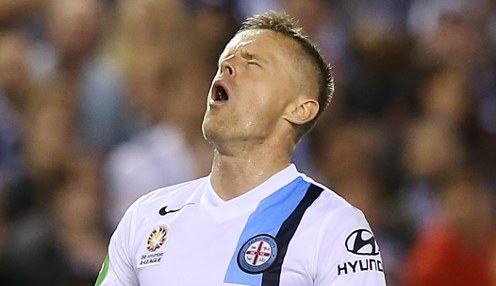 Melbourne City have handed attacker Harry Novillo a two-year deal, as they continue to rebuild their squad for 2015-16.

Novillo was signed as an injury replacement player for Damien Duff in March after the former Chelsea and Newcastle United star was ruled out for the rest of last season.

Harry was an important player and contributor for us in the final three months of the season.

Chelsea are 2.50 to win the Premier League title.

Novillo started eight games and came off the bench in two more as City reached the A-League semi-finals for the first time.

The Martinique-born player, who has played two games for his home country, scored twice for John van ‘t Schip’s side including in his second game against Newcastle Jets.

City, who are 9.00 to win the Grand Final, parted company with Duff at the end of the season and have also seen the likes of Kew Jaliens, Rob Wielaert, Mate Dugandzic and Iain Ramsay leave the club.

Van ‘t Schip said after securing the deal for Novillo: “Harry was an important player and contributor for us in the final three months of the season and illustrated his value to the team during that period.

“Despite joining the team in March, Harry was able to quickly adapt to a new environment and make a positive contribution and he is an exciting player.

“With Harry here from the start of the pre-season, we are confident that he will be able to give even more to the team next season.”

Novillo started his career in the youth system at Lyon and had a year-long loan spell at Le Havre.