Phoenix give top spot away 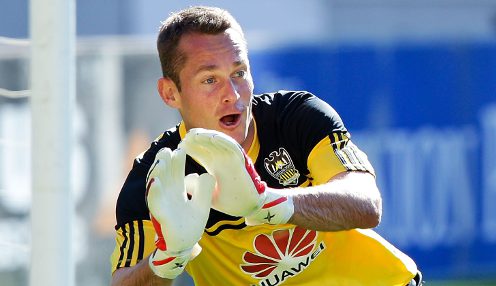 Even though he conceded three goals, Glen Moss had a good game.

Having worked so hard to get to the top of the A-League table, Wellington Phoenix suffered a heavy fall from their perch with a 3-0 home defeat to Melbourne Victory.

Ernie Merrick’s side claimed top spot for the first time in their history by racking up four straight wins. But their season has potentially blown up in their faces after they lost 3-0 in front of their own fans in consecutive matches.

Victory took a big step towards the premiership as they took over at the summit and are now a point clear with a game in hand over all their rivals. Kevin Muscat’s side made an early statement when they took the lead after just 34 seconds, Besart Berisha’s run drawing defenders before he slipped the ball to Gui Finkler who produced a clinical finish.

To be at home two weeks in a row and lose 3-0 both times is extremely disappointing.

Phoenix keeper Glen Moss came up with a series of excellent saves to prevent the visitors extending their lead before the break, but could do nothing about Victory’s second just before the hour mark.

Midfielder Alex Rodriguez was dispossessed in his own half and Berisha raided down the right. He tried to repeat the formula of the first goal by picking out Finkler in the middle but, as the ball came across, Wellington skipper Andrew Durante got there first and prodded it past a wrong-footed Moss.

It was game over seven minutes later when Victory made it 3-0 through A-League all-time record scorer Archie Thompson. The veteran former Socceroo prodded a Fahid Ben Khalfallah volley towards goal and, when it was cleared off the line by Nathan Burns, he was able to net the rebound.

Durante said: “We had the opportunity to keep ourselves right up there and break away from the bunch a little bit. To be at home two weeks in a row and lose 3-0 both times is extremely disappointing.”

The Phoenix are 5.50 to beat Melbourne City by a one-goal margin.