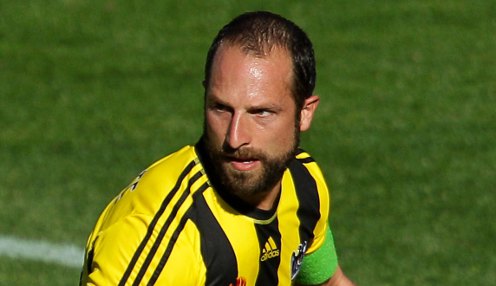 They have been teetering for the past two months, and Perth Glory finally fell off their perch at the top of the A-League as they lost 2-1 at home to Wellington Phoenix.

The Phoenix, who are 5.00 to win the Grand Final, will end the round in top spot for the first time in their history thanks to a brace from Roy Krishna.

Glory had led the way for 16 consecutive weeks, but went into the top-two clash having failed to win in seven matches.

They scored one of the goals of the season through Ruben Zadkovich to level the scores but were undone 12 minutes from time when Fiji international Krishna twisted past two defenders to score and give Ernie Merrick’s side a third consecutive victory.

The visitors had some luck for their first goal, midway through the first half. Glory defender Josh Risdon went to clear a Louis Fenton cross but was unaware that Krishna was charging in, and only succeeded in smacking the ball against the winger’s shins and into the net.

Perth responded well, with veteran midfielder Zadkovich getting them back on terms six minutes later with a stunning shot from almost 30 yards. The ball beat Phoenix keeper Glen Moss and found the net off the inside of the left post.

Wellington’s Jason Hicks came within a whisker of what would have been just his second A-League goal in the second half, his shot going just the wrong side of the far post.

Krishna won it for the Phoenix when he received the ball on the corner of the area and jinked inside to make room for a shot that beat Danny Vukovic inside his near post.

Wellington Phoenix are 3.25 to win their next game against Brisbane Roar.