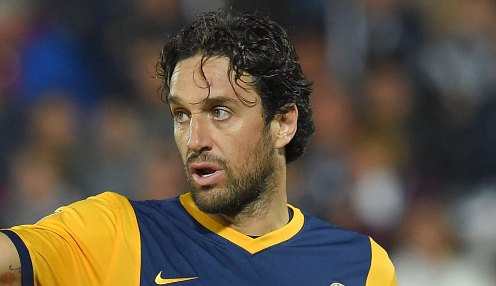 The 37-year-old is top scorer in Serie A this season with Verona, having netted 21 goals. But Adelaide believe they may have a chance of luring the forward to the club.

United, who are 7.00 to win the Grand Final, have asked the player’s representatives for more contract information and Griffin says they are serious about their interest.

Toni, who scored 20 goals in 34 games last season, has been ever-present for Verona this time around.

“If we do something we do it seriously,” said Griffin. “Basically we’re looking at this situation with Luca Toni seriously; we’re sitting on the whiteboard working out how we can do it.

“The first thing we have to see is whether it can be achieved and then you look at how you fund it, to be blunt.”

The Reds chairman added: “We’ve got a huge Italian community here and this is also great for other communities to see a fantastic striker. He’s six foot five inches and he is a good left and right- footed player.”

Toni made his debut in 1994 for Modena and has played for 13 different Italian clubs as well as having a three-year spell in Germany with Bayern Munich when he helped the Bavarian side win the Bundesliga and German Cup.

If he finishes as Serie A’s top scorer this year it will be the second time in his career – he did so in 2006, when he also won the European Golden Shoe.