Reds winger off to Denmark 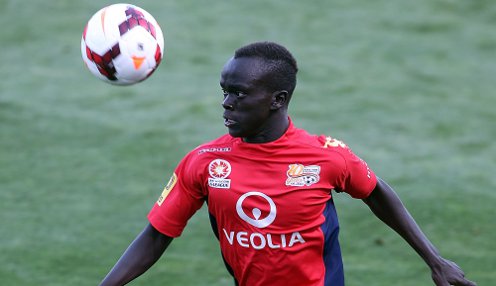 Adelaide United have allowed teenage winger Awer Mabil to move to Danish side FC Midtjylland, with the Reds saying they are happy the Australia U-20 international has secured his dream move to Europe.

Mabil is flying out to Denmark on Tuesday to have a medical before finalising his contract with Superliga champions Midtjylland.

We are all very happy for him and pleased to have assisted in helping him achieve his goals.

Mabil, who lived in a Kenyan refugee camp until emigrating to Australia aged 10 with his family, has been with Adelaide since 2012 and made his A-League debut in 2013. He played 21 league games for United last season though 14 of them were from the bench.

He started in the FFA Cup final when they beat Perth Glory 1-0 to win the inaugural competition, with United 4.33 to win the 2015 FFA Cup.

Reds CEO Michael Petrillo said: “It shows that if you have the passion and commitment you can forge a pathway through to the A-League with the Adelaide United Football Club and as in Awer’s case, Europe.

“I’m sure that he will be a great addition to their team and we will miss him, but understand that his desire and dream was to play in Europe. We are all very happy for him and pleased to have assisted in helping him achieve his goals.”

Mabil said he was grateful to United, who are 7.00 to win the Grand Final, for allowing him to move to what he described as “a very strong and ambitious club that sets high standards.”

The winger, who scored six goals in the league last season, won the FFA U20 Male Player of the Year award last year.