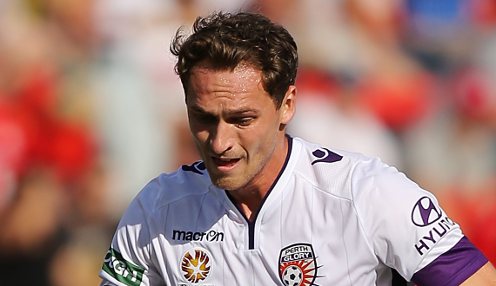 Rostyn Griffiths was on the scoresheet for Perth against Western Sydney.

Perth Glory revived their Premiership hopes when Josh Risdon netted a superb late winner to give them a 3-2 home victory over Western Sydney Wanderers.

He powered home a shot from 23 yards that gave Wanderers keeper Ante Covic no chance as Kenny Lowe’s side won for the first time in 85 days and handed Western Sydney their 15th defeat in 23 matches this season.

The visitors, who are 34.00 to win the Asian Champions League, took an early lead when Dutchman Romeo Castelen controlled a through-ball from Lacopo La Rocca and slotted past keeper Danny Vukovic.

That advantage lasted until ten minutes into the second half, when Sidnei Sciola converted at the far post after Richard Garcia had headed Yusuke Tanaka’s mistimed clearance towards goal.

Kerem Bulut, who had scored twice in Western Sydney’s midweek win over Brisbane Roar, was unlucky to be denied another at nib Stadium. He burst through and rounded keeper Vukovic but saw his shot strike the post.

Perth went in front midway through the half, just after Chris Harold had hit the post. Scott Jamieson delivered a perfect corner onto the head of Rostyn Griffiths, who got ahead of Covic to score.

Four minutes later, a Glory mistake saw Wanderers draw level after Harold’s pass across goal was intercepted by La Rocca. His instant ball found Bulut, who slotted the ball past Vukovic for his fifth goal in as many starts.

It was not to prove enough to salvage a point for Tony Popovic’s strugglers, though, as Perth picked up their first home win since before Christmas.