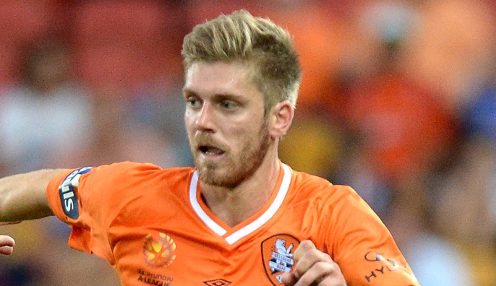 Defender Daniel Bowles says Brisbane Roar are “buzzing” as they prepare for their toughest game of the season in China.

The defending A-League champions must beat Asian Champions League Group G leaders Beijing Guoan on Tuesday to have any realistic chance of making it through to the knock-out phase.

Having already lost at home to the Chinese Super League side, who are unbeaten so far in the competition, that’s a tall order for Frans Thijssen’s side.

Beijing haven’t even conceded a goal in their two home group victories so far, but Thijssen has at least ensured he will have fresh legs at his disposal after making eight changes for Saturday’s 1-0 home loss to Melbourne Victory.

Bowles put in a man of the match display at Suncorp Stadium as the Roar lost for the second time in four days to Victory, allowing the visitors to put one hand on the A-League Premier’s Plate.

The 23-year-old said: “We went through a form slump but we are playing our way out of that. We have the opportunity now to play some finals football. It’s exciting.

“We’ve got two more games in ACL now. All the boys are buzzing and we will be going out there and giving it our all.”

Brisbane, who are 21.00 to win the Grand Final, have booked their place in the A-League Finals Series, and the chance to win their second consecutive championship, following Perth Glory’s suspension from the finals.

It’s been a roller-coaster ride for the Roar this season, with the departures of a host of top players and championship-winning coach Mike Mulvey being axed early in the campaign.

Thijssen, who has yet to be confirmed in his job after being named interim coach following Mulvey’s departure, will be without defender Jerome Polenz and keeper Michael Theo for the trip to Beijing.

The injured pair are in contention to return for the final match of their regular season at home to bottom side Newcastle Jets on Friday.