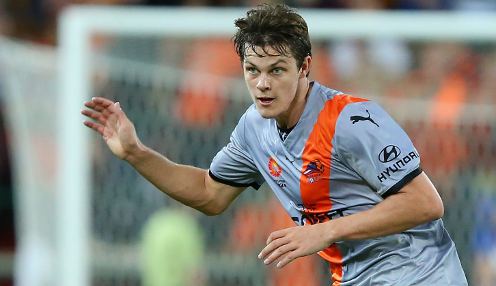 James Donachie is one of several Roar defenders in the treatment room.

Brisbane Roar have a shortage of defenders as they start a hectic period of three games in eight days.

The defending champions come up against premiership contenders as they go to Adelaide United on Saturday and then take on Melbourne Victory in back-to-back matches.

Things are looking bleak for their chances of qualifying for the knock-out stages of the Asian Champions League after they lost 3-1 away to Suwon Bluewings in South Korea on Wednesday.

That defeat also left them with two more defensive problems, to James Donachie and Shane Stefanutto.

Donachie suffered a hip injury in Suwon and was substituted in the second half, while Stefanutto hurt his calf in the warm-up and was unable to play.

Fullback Jerome Polenz’s quad injury will keep him on the sidelines for another two weeks and experienced central defender Jade North will miss the Adelaide match with a groin problem.

It leaves interim coach Frans Thijssen likely to keep faith with Corey Brown against the Reds, despite Brown having endured a nightmare in South Korea.

We rely on players to be disciplined and to do their roles and, of late, we’ve lost our way a bit in terms of our individual jobs.

Called up as a last-minute replacement for Stefanutto, the left-back turned over possession to give Suwon chance to score their first goal and was partly at fault for both the other goals.

Luke DeVere, who is certain to keep his place in defence, said the team – who are 51.00 to win the Asian Champions League – needed to cut out individual mistakes.

“We rely on players to be disciplined and to do their roles and, of late, we’ve lost our way a bit in terms of our individual jobs,” said DeVere, who scored the Roar’s consolation goal in Suwon.

“If you look at some of the goals we’ve conceded, it comes down to some pretty simple mistakes.”

Brisbane will bring back Costa Rican forward Jean Carlos Solorzano and Steven Lustica – who scored a hat-trick in the last A-League game against Central Coast – for the United match.

Meanwhile, Brisbane have been handed a reprieve in their bid to make the A-League finals after second-placed Perth Glory were found guilty of breaching their salary cap.

Perth have been dropped from this season’s finals and fined $269,000 so the Roar will finish in the top six providing they pick up one more point from their four remaining matches to ensure they cannot be caught by Central Coast Mariners.