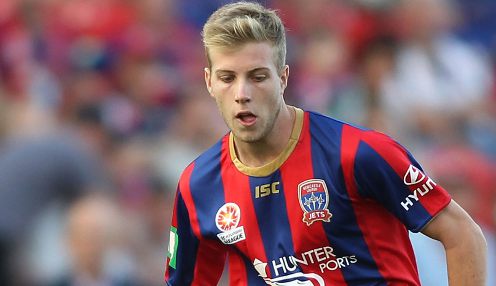 Andrew Hoole has agreed a move to Sydney FC.

The 21-year-old will join the Sky Blues, who face a home A-League semi-final next week, later this month.

Hoole rejected an offer in January to stay with the Jets, where he has been since he started his youth career in 2011.

He was still on a youth contract when he made his senior Newcastle debut two years ago and finished the campaign by playing his 50th A-League match.

Hoole has only scored once in his senior club career but has three goals in six appearances for Australia U-23.

Sydney coach Graham Arnold said Hoole was a quality young player with a proven track record in the A-League.

He added: “I’m looking forward to working with him and I can’t wait to nurture the talent that he has already displayed this season.

“I’m confident Andrew will provide great competition for places and that will only see us build on our record breaking 2014-2015 season in the future.”

The winger said he was proud to be joining a club whose ambitions matched his own, adding: “I want to be successful in my career and I believe Sydney FC is the best place to make that happen. I’m looking forward to linking up with my new team mates and I’m excited for the future.”

Sydney snatched second place in the league last weekend when they won away at Wellington Phoenix.

Meanwhile the Jets, who finished with the wooden spoon after winning just three games all season, have re-signed
Serbian midfielder Enver Alivodic on a one-year extension and brought in 22-year-old state league striker Andy Brennan.

Wellington Phoenix are 2.10 to win their play-off clash with Melbourne City on Sunday.