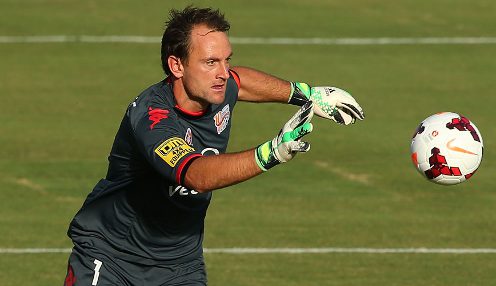 Adelaide United keeper Eugene Galekovic is anticipating a season-defining clash when the Reds go to Sydney FC on Saturday.

United’s 1-0 win away to Newcastle Jets on Sunday brought them within a point of the Sky Blues, and there are now just two points separating the top five teams in the league.

They are the most in-form team of the comp right now and it’s a massive game for both teams.

The battle for the Premier’s Plate is almost certain to go down to the final round and matches between the contenders will be ultra-important in the run-in.

However, coach Josep Gombau was unhappy with his team’s performance at Hunter Stadium at the weekend, where Marcelo Carrusca scored the only goal against the league’s bottom side.

Galekovic wouldn’t argue with that assessment, saying: “The main thing is that we got the points, but we have to assess ourselves and our training to prepare for Sydney – they are the most in-form team of the comp right now and it’s a massive game for both teams.”

Sydney’s 3-0 win away to leaders Wellington Phoenix on Sunday re-emphasised the quality of the Sky Blues’ squad.

“We can’t just rock up or play like we did Saturday,” said Galekovic. “Whoever wins these games at this time of the season has the best chance at the top of the table, and we’ll be fully focused on that.”

The Reds may not get Carrusca back before the end of the regular season after he was forced off with a quad injury against Newcastle.

With the loss of their playmaker and having put in a disappointing performance, Gombau felt there were few positives other than the three points.

“We didn’t find our right place on the field at any moment,” said the coach. “We got the result but in terms of football, in terms of the way that we played and in terms of chances, I don’t think we deserved to get the three points.”