Sydney FC get Antonis back for semi 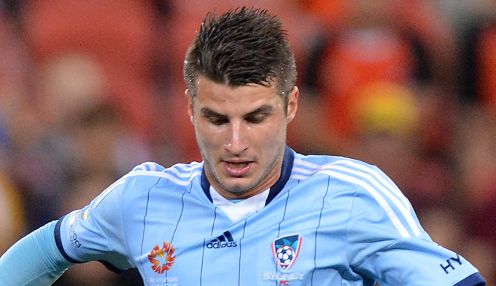 Terry Antonis is set to make a return against Adelaide.

Midfielder Terry Antonis is on track to return for Sydney FC in Saturday’s semi-final against Adelaide United.

The 21-year-old Socceroo will play against the Reds providing he comes through training this week.

He has been on the sidelines for almost two months, after picking up a knee injury while with Australia at the Asian Cup in January.

Coach Graham Arnold is delighted to have Antonis back for the clash with United, who have beaten his side in all their three meetings this season.

“He trained fully in (an in-house) game on Saturday, he’ll be training all week so he’ll be involved on Saturday for sure,” said Arnold.

Skipper Alex Brosque acknowledges Antonis won’t be up to playing the full 90 minutes, but indicated he could be a valuable impact player.

“He’s looking good again and he’ll be a player that can definitely help in the latter stages of the game,” said Brosque.

“Whatever impact he does have, he’s shown already this year he can be a handful.”

The Sky Blues have confirmed marquee striker Marc Janko, whose 16 goals won him this season’s Golden Boot award, is a definite starter at Allianz Stadium.

The Austria international missed the final match of the regular season, the 2-1 win away to Wellington Phoenix, with a shoulder injury but has been able to recover with Sydney being able to sit out the first round of the finals.