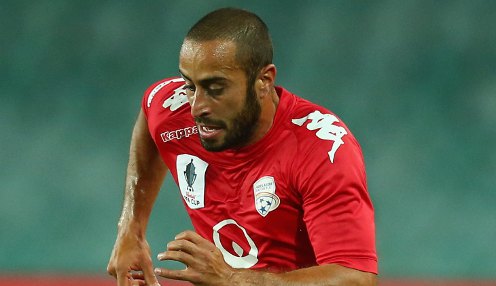 Tarek Elrich produced a contender for goal of the season in Adelaide United’s final regular season match as the Reds beat Melbourne City 4-1 at Coopers Stadium.

The two teams are both heading into the finals, but while United boosted their confidence with a dominant performance, the visitors must try to pick themselves up quickly.

City, who will be away in the elimination finals, go into the play-offs having shipped seven goals in losing their last two matches on the road.

John van ‘t Schip’s team had a shocker of a first half and trailed 3-0 at the break.

The Reds went in front on 18 minutes when Sanchez went through before slipping a pass for his fellow countryman to fire an angled drive past Tando Velaphi.

It was another Spanish combination that unlocked the door to their second goal. Sergio Cirio’s curling shot was pushed away by Velaphi but Sanchez was first to the rebound and produced a clinical finish.

Defender Elrich picked up the ball well inside his own half 12 minutes before the break and had just one thing in his mind. He dribbled his way through, beating three players before slotting past Velaphi.

United extended their lead on the hour mark, after Jonatan Germano brought down Craig Goodwin in the area.

Substitute Cameron Watson scored from the spot, and though he was made to re-take it due to encroachment, he kept his cool and sent his second effort into the opposite corner.

Adelaide were unlucky to concede six minutes later as Bruce Kamau made unintentional contact with Aaron Mooy in the box and Mooy picked himself up to fire the penalty past Eugene Galekovic.

The two sides each had a man sent off in the second half, with both Kew Jaliens and Michael Marrone facing a ban from the first week of the finals.

City defender Jaliens saw red for bringing down Goodwin as he bore down on goal, and Marrone was dismissed for a dangerous tackle on Erik Paartalu.

Football continues in the English Premier League. With Chelsea leading the title race, they are 2.37 to finish top. Manchester United are 5.50 and Manchester City priced at 3.75.