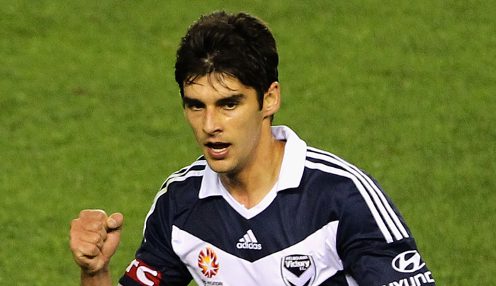 Melbourne Victory would secure a top-two finish if they beat Brisbane Roar on Sunday.

Gui Finkler is set to return for Melbourne Victory as they look to secure a top-two finish by beating Brisbane Roar at Suncorp Stadium.

The top of the table has been incredibly tight for the past few weeks, but a win would mean Kevin Muscat’s side can’t be caught by either Adelaide United or Wellington Phoenix.

The reward for a top-two spot is a bye in the first week of the Finals Series and then a home game in the semi-finals. Both the top two teams will qualify for next year’s Asian Champions League – the premiers to the group stage and the runner-up to the qualifying round.

Victory slipped up last weekend when they lost 1-0 at home to bottom side Newcastle Jets, but that is their only defeat in the past seven matches.

They beat Brisbane 2-1 away from home on Wednesday and have stayed around for the second meeting between the sides at the same venue on Saturday.

Finkler, who missed Wednesday’s win with muscle soreness, is likely to return to the starting side against the defending champions.

Carl Valeri, scorer of Victory’s first goal in midweek, said the squad were confident their depth and superior fitness would hold them in good stead for the second game.

“It was a taxing game for both sides, both spent a lot of energy so I dare say Saturday will be extremely tough and the team that’s stronger physically will get the result,” he said.

“I’ve always said we’ve got great depth, some of the players that aren’t playing would be starting in most A-League teams.”

Valeri added: “It’s tough because tactically you’ve just played each other, it’s a strange feeling but we’ve got a lot on the line and we know what’s at stake.”

The Roar will be without Socceroos defender Luke DeVere, who picked up a quad strain in the first game.