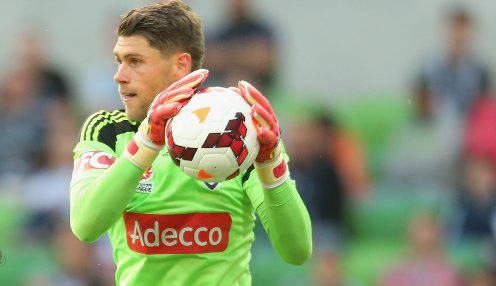 Melbourne Victory will be without first-choice keeper Nathan Coe for the rest of the season.

The 30-year-old, capped three times by Australia, picked up a back injury in the 3-0 win over Wellington Phoenix earlier this month.

He has missed the past three games, and Victory, who are 2.50 to win the Grand Final, have now revealed the injury will keep him on the sidelines throughout their finals campaign.

Coe will have surgery in Melbourne on Friday on an impinged nerve in his back.

The club’s football operations manager Paul Trimboli said: “Sustaining an injury like this at any stage of the season is disappointing for the player first and foremost, and also the club, and so close to finals makes it even more difficult for everyone.

“As the playing group focuses on the final game of the season this Sunday and the upcoming Finals Series, their thoughts will also be with Nathan as he recovers from surgery.

“The recovery time for this type of surgery is in the vicinity of three months so we will ensure that Nathan’s health and wellbeing is at the forefront of our minds during this lengthy recovery period.”

Coach Kevin Muscat is considering bringing in a replacement keeper for the rest of the season, though Lawrence Thomas has done well since stepping in to replace Coe – he has only conceded one goal in three games.

Victory will secure the Premiership on Sunday, barring a disaster. They have a three-point advantage over second-placed Sydney FC and their goal difference is seven better than that of the Sky Blues.

Unless Sydney win away to Wellington Phoenix, who are chasing second spot, then the Premier’s Plate will already belong to Victory by the time they kick off their final match at home to Central Coast Mariners where they are 1.33.