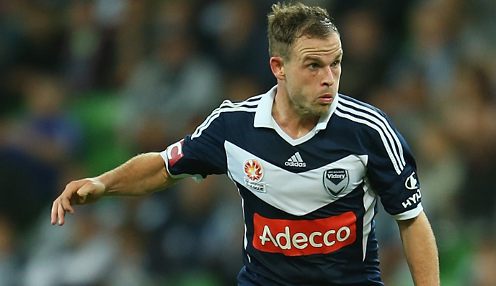 Broxham will be in the side – albeit away from his favoured position and filling in at right-back – when Victory look for revenge over the Sky Blues for their 2010 defeat in the decider.

I don’t think them having a good away record will change anything for us or how we go about it.

Though he played in that match, and scored a penalty in their 4-2 shoot-out defeat, Broxham says it’s not something that still hurts.

And he has brushed off suggestions the Grand Final being in Melbourne will suit Sydney better due to their unbeaten record away from home this season.

Broxham is being used in defence because coach Kevin Muscat prefers the midfield partnership of Mark Milligan and Carl Valeri.

He said: “You do get a little bit frustrated, everyone would like to have the one position. Some clubs have a player like me that does a role for them.

“In midfield we’ve got a couple of great players and I’m happy to shift for them as long as I’m contributing.”

Sydney FC are 2.20 to be crowned Grand Final champions, with the Victory 1.61.

Sydney are the first team in the league’s 10-year history to go through a season undefeated on the road, but they will come up against a Victory side who have the best home record this season.

While the Sky Blues won 10 of their 14 away games, Muscat’s team posted nine wins and two draws at home.

“We’ve got the home ground, so it’s obviously up to us to take that advantage and win the game,” said Broxham. “I don’t think them having a good away record will change anything for us or how we go about it.”

The two sides drew 3-3 in their only previous clash in Melbourne this season, at Etihad Stadium in December.