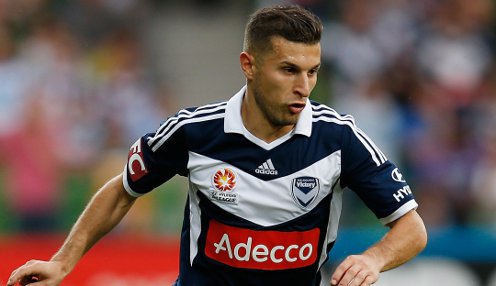 Coach Kevin Muscat is hoping to take advantage of Wanderers’ two-day turn-around from their win over Melbourne City on Wednesday.

But the time issue is also working against his club, with All Whites ace Barbarouses struggling to shake off a back problem that left him unable to train on Wednesday.

We’ve got to get out there and focus and zoom in on the here and now.

“He’s struggling a little bit as well, he’s got a bit of complaint coming from his back,” said Muscat. “We’re hoping he’ll be fine but no risks will be taken.”

If Barbarouses is unfit, Victory, who are 2.10, will choose between Connor Pain and Archie Thompson as his replacement.

Right-back Jason Geria has been ruled out for the Pirtek Stadium clash after taking a knock to the leg in last weekend’s 1-1 draw with leaders Perth Glory.

Scott Galloway, who was rested from that game, is the most likely replacement for Geria, though utility Leigh Broxham has also been included in the squad.

Western Sydney, although buoyed from moving off bottom spot in the table with Wednesday’s win, are struggling to cope with a punishing stretch of 11 games in 35 days.

Muscat says his side won’t go into the match expecting that factor to work in Victory’s favour.

“If we have that mentality we’ll (get hurt),” he said. “It’s not ideal for them, but it won’t make any difference if we don’t turn up and prepare well and work hard and play at a real high tempo.

“And that’s been the message. We’ve got to get out there and focus and zoom in on the here and now.”