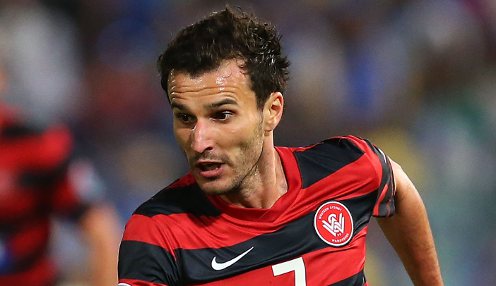 Labinot Haliti is returning to Newcastle Jets this season.

Labinot Haliti has returned for a third spell with Newcastle Jets, with his former Western Sydney Wanderers teammate Mateo Poljak joining him at the club.

Haliti and Poljak have both signed two-year contracts with the Jets and will link up with the squad at training for the first time on Friday.

The duo were released by Wanderers on Wednesday, with Tony Popovic having now seen 17 players from last season’s squad leave the club.

Poljak and Haliti started together in both legs of Western Sydney’s Asian Champions League final win over Al-Hilal last November, and had played 133 games between them since signing as foundation players.

Mateo will provide composure and leadership in our midfield, and we see it as a major coup for the club that we have been able to attain his services.

Haliti, who plays as a winger or second striker, spent two years with the Jets from 2005 and then moved back to the club, initially on an injury replacement deal, in 2009. He scored 12 goals in 70 matches during his second stint at Hunter Stadium.

Former Croatia U-19 international midfielder Poljak arrives after being released from the final year of his Wanderers deal.

Jets coach Scott Miller, whose club are 26.00 to win the A-League Grand Final, said: “Mateo will provide composure and leadership in our midfield, and we see it as a major coup for the club that we have been able to attain his services.”

Poljak said Newcastle’s fans deserved to see the club get back on track, and was looking forward to his new challenge.

He added: “When Scott (Miller) first called me I said to my wife that he was very enthusiastic. Seeing his history with Fulham, being engaged with the Socceroos and knowing his age and ambition, I knew straight away that this was a good move. I really liked his way of communication.”

The Jets are reported to be in discussions with former Adelaide United defensive utility Cam Watson, and have run the rule over a number trialists in pre-season.

Newcastle are 3.60 to win their first game of the A-League season against Wellington Phoenix, who are 1.83 with the draw 3.75.