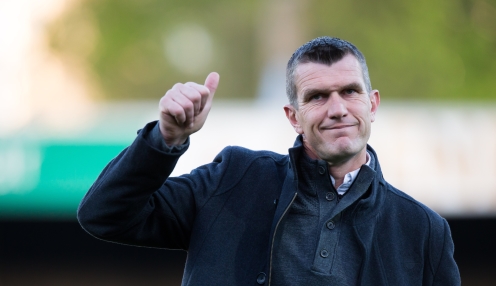 Marinus Dijkhuizen was named Brentford boss in May.

Brentford have completed a notable coup by persuading the Denmark international defender Andreas Bjelland to move to Griffin Park from FC Twente.

The 26-year-old has signed a three-year contract with the Bees, who reached the Championship play-offs last season and can be backed at 5.50 to be promoted in 2015/16.

Bjelland has won 21 caps for his country and also represented Denmark at Under-16, Under-18, Under-19 and Under-21 levels.

I am very happy that we have brought Andreas to Brentford.

After coming through the youth team ranks at Lyngby, he went on to enjoy a three-year spell with FC Nordsaelland before signing for Twente.

Brentford’s head coach Marinus Dijkhuizen said: “I am very happy that we have brought Andreas to Brentford. He brings a lot of experience to the squad and that is good for us as we have a lot of young players. He is good defender but also likes to play football from the back.

“Andreas is also a Danish international and it is good for the image of Brentford FC that we can attract such players.”

Brentford can be backed at 2.00 to win their first Championship game of the season on 8th August against Ipswich Town.