Championship Betting: The WhoScored.com guide to the promotion race 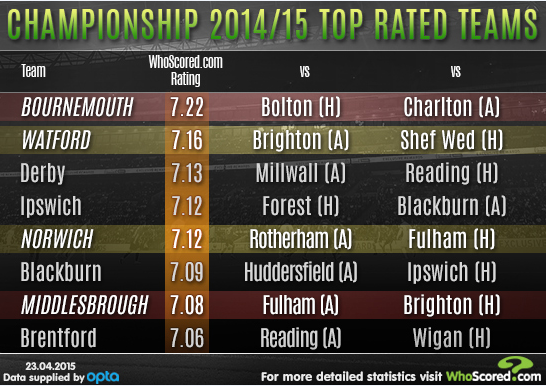 It’s Watford and Bournemouth who are in position right now and the purists out there would certainly suggest that they are more than worthy of their current standing.

Eddie Howe‘s side have surpassed all expectations this season to score a league high of 92 goals thus far, while their league-leading possession figures of 58.1% have also helped the Cherries to the highest WhoScored.com rating of any Championship side (7.22).

The south coast side were in the driving seat ahead of last weekend but late heartache saw them drop two crucial points courtesy of a 95th minute penalty from Sheffield Wednesday, with the game ending 2-2.

Two of Bournemouth’s strongest players this season had big parts to play in that result, with right-back Simon Francis enduring a low point by seeing red before Matt Ritchie struck this stunning free-kick that looked to have earned Howe’s side the points regardless. Both players take their place in WhoScored.com’s team of the season so far, with the latter leading the lead in assists (16) as well as scoring 12 goals himself.

Though a home match against Bolton – who have the second worst away record in the league (16pts) – looks favourable, the Cherries must get a result at Charlton on the final day, a tough task given that the Addicks have lost just four matches at the Valley all season. A price of 1/5 for promotion looks short, with Boro breathing down their necks.

Watford, meanwhile, look to be in a great position, despite having had four managers over the course of the campaign. They too have been free-scoring, with the strike trio of Vydra, Ighalo and Deeney accounting for 54 of their 88 league goals this season (61.4%), and it’s the latter who has been most integral to the side’s rise to the summit.

Captain Troy Deeney has led by example to score 20 goals and register a further eight assists, so it’s little surprise that his WhoScored.com rating (7.50) is enough to earn a place in the team of the season.

The Hornets are second to Bournemouth in terms of their overall team rating from WhoScored.com (7.16) but have been closing the gap courtesy of a superb record in the calendar year. With a trip to Brighton up next before a home clash with mid-table Sheffield Wednesday on the final day, Watford’s odds of 1/5 to gain promotion are understandable, with an outright winner bet (11/10) far more lucrative. They can’t, however, afford to make the same mistakes as Bournemouth against Stuart Gray‘s side.

It’s the presence of Middlesbrough that will be unnerving the top two, and indeed the impressive recent form of Aitor Karanka‘s side. The Teeside outfit have shown real mettle to dispatch of Wolves and Norwich recently and appear capable of holding their end of the bargain. While not exactly the real entertainers of the league, netting just 65 goals compared to the two above them, Boro have the best defensive record by a distance (just 33 conceded).

While Boro may boast the PFA Championship player of the year in Patrick Bamford it’s club captain Grant Leadbitter who has really inspired their success, with 11 goals and nine assists contributing to a WhoScored.com rating of (7.39).

Although their team rating of 7.08 may only rank seventh in the league, matches against Fulham and Brighton – each of whom are now safe from relegation with nothing to play for – mean you’d have to fancy Karanka’s men to pick up maximum points, and odds of 4/6 to be promoted are pretty hard to resist.

Norwich’s defeat to Middlesbrough last time out put a significant dent in their promotion aspirations but the Canaries can’t be written off just yet having enjoyed great success since the arrival of Alex Neil in January.

Hoping to return to the top-flight at the first time of asking, the East Anglian outfit have relied on goals like the above from Cameron Jerome (18) to fire them up the league this season, along with a far less likely source in Bradley Johnson. Having never scored more than three goals in a season for the club before the current campaign the midfielder has managed 13 in 2014/15, helping to earn him a place in WhoScored.com’s team of the season so far with a rating of 7.34.

With trips to Rotherham and Fulham to come they too will be confident of picking up successive wins in the coming weeks but promotion odds of 5/4 are indicative of the fact that they may well have left themselves with too much to do.

Whatever happens it has been an incredibly entertaining ride in the Championship, as ever. We’re backing Watford to win it and Bournemouth to hold their nerve, but if it’s a decent pay out that you’re after, Middlesbrough are set to pounce if Howe’s men let it slip again.

Check out the full team ratings below, along with each side’s final two fixtures, and have a look at the latest Betfair odds