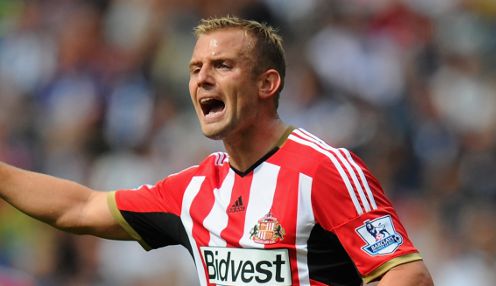 Sunderland head coach Dick Advocaat has labelled Lee Cattermole as ‘central to the success of our team’, after the midfielder signed a long-term contract extension.

The 27-year-old former England Under-21 international has been with the Black Cats for six years, having joined from Wigan Athletic for a fee of around £6million in August 2009.

He is a motivator, a leader and central to the success of our team.

And Advocaat is delighted to see Cattermole now contracted at the Stadium of Light until the summer of 2021, with the combative schemer clearly highly thought of by the veteran Dutchman.

He told the club’s official website: “Lee is the controller of the side. He is a motivator, a leader and central to the success of our team. To know that he will be with us for many years to come is very important to the club.”

Sporting director Lee Congerton added: “Lee is a hugely important part of our team, both on and off the field, and we are delighted that he has committed his long-term future to Sunderland.”

The Wearsiders can be backed at 3.00 to be relegated next season and are 1.40 to escape the drop, while they are 9.00 to finish bottom of the table.

Sunderland are also close to signing Wales defender Adam Matthews from Celtic, having agreed a fee with the Scottish champions for the 23-year-old former Cardiff City man.