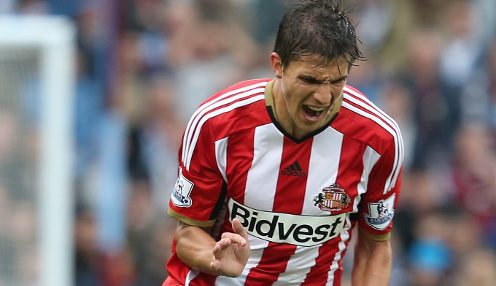 Santiago Vergini is being linked with an imminent return to Argentina.

Dick Advocaat hopes to bring up to four new players to Sunderland this summer but has indicated that Santiago Vergini has played his last game for the club.

The Black Cats have signed Adam Matthews from Celtic and made Sebastian Coates’ loan switch to the Stadium of Light from Liverpool a permanent deal since the end of last season, but Advocaat is anticipating several more new arrivals.

A new central defender is at the top of the veteran Dutch manager’s wish-list, while Belgium international Nicolas Lombaerts and wingers Jeremain Lens and Stewart Downing have also been linked with moves to Wearside.

Advocaat said: “We need more competition in the squad. We have two new players with Coates and Matthews, but hopefully we will still get some other ones in as well, three, maybe four.

I’m sorry for Santi, but he has to go and find another club.

“It depends on what players we can get, and we are working on that.

“And it depends on the players who will come, because we are not Manchester United or Manchester City, and we don’t have unlimited money. So we have to be very careful about the players we bring in.”

Meanwhile, Advocaat said of Vergini: “I don’t want to go on with him, with all respect. I’m sorry for Santi, but he has to go and find another club.”

The defender, who made 51 appearances for the club in all competitions, has been linked with a transfer to Newell’s Old Boys in his native Argentina.