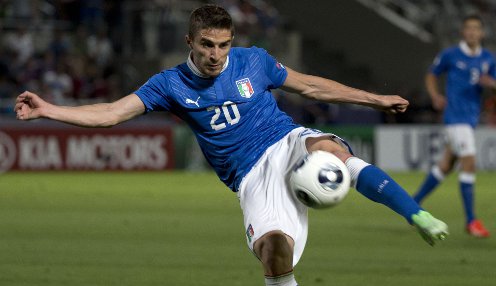 Fabio Borini is looking to leave Liverpool this summer and is wanted by “teams from all over Europe”, according to his agent.

The 24-year-old moved to Anfield from Roma in the summer of 2012 but has failed down a regular shirt on Merseyside and featured just 18 times for Brendan Rodgers’s side last season.

The Italy forward enjoyed an impressive loan spell with Sunderland in their fight against relegation from the Premier League under Gus Poyet in 2013-14 and turned down a move to the Stadium of Light last summer, while he also rejected the chance to join Queens Park Rangers.

“He has no preference, he just wants a team that gives him a clear chance to prove himself.”

“Fabio wants a new experience,” he said. “We expected more consideration from Liverpool. There are teams from all over Europe interested in him.

“Top clubs in Europe are keen on him, from the Premier League to the Bundesliga and there also clubs in Italy, but many clubs in Italy have had coaching changes and that has slowed things down.

“He has no preference, he just wants a team that gives him a clear chance to prove himself.

“Right now he feels like a lion in a cage.”

Liverpool agreed £12million deals with Sunderland and QPR last summer only for the player to turn down both options and de Marchi is hoping Borini’s future is resolved swiftly.

“His current value is that given by Sunderland last year,” de Marchi said. “However, that figure could be affected by the season he’s had at Liverpool and the fact that in a year his contract runs out.

“For the time being, everything is on standby as the player is currently on his honeymoon but will return shortly.”

Liverpool are currently priced 3.75 to secure a top-four finish in the Premier League next season and 1.36 in the top-six betting.