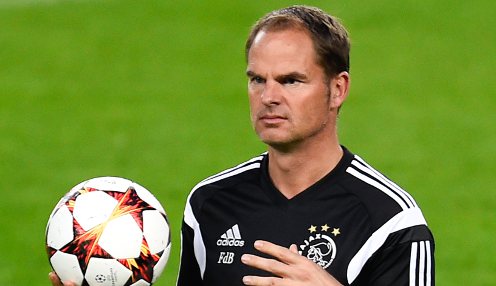 Frank de Boer has said it would be a “disaster” for Ajax if Netherlands goalkeeper Jasper Cillessen joins Manchester United this summer.

The Premier League giants are understood to have earmarked the 26-year-old as a valid replacement for David de Gea if the Spain goalkeeper is allowed to complete a return to his homeland to join Real Madrid.

“We want to keep him and he wants to stay, but if Manchester United come with a bag of money it can be difficult.”

Old Trafford manager Louis van Gaal knows Cillessen from his time in charge of the Dutch national side and Ajax coach de Boer fears losing his number one.

“For us it would be a disaster if that’s going to happen because it’s already very difficult to find a good goalkeeper, especially if you have the best goalkeeper in Holland,” he told Sky Sports News.

“We want to keep him and he wants to stay, but if Manchester United come with a bag of money it can be difficult.

“We have to wait but the transfer period still has a long way to go.”

Cillessen says he is flattered to be linked with the Premier League giants but has no immediate desire to leave the Amsterdam club. He revealed he was not aware of an offer from Old Trafford officials and could do little to stop the speculation.

“I ask my agent, who also is [Manchester United forward] Memphis Depay’s, and he says we don’t know anything.

“Of course, it’s a great club, Manchester United, but I cannot do anything with rumours. It would be a great step.”