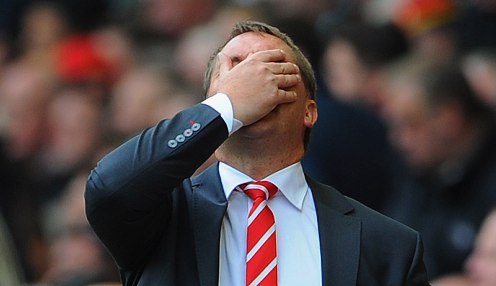 Brendan Rodgers has admitted that he faces a summer of uncertainty after watching his Liverpool side lose 6-1 at Stoke City.

The Reds conceded five first-half goals at the Britannia Stadium as they slumped to an embarrassing loss against Mark Hughes’ vibrant side.

Steven Gerrard did manage to score for Liverpool in the second half of what was his final appearance for the club.

For everybody connected with Liverpool, we are all embarrassed by that result.

Rodgers admitted after the humiliation at Stoke: “I’ve always said if the owners want me to go, then I go.

“For everybody connected with Liverpool, we are all embarrassed by that result.”

Liverpool must now go through two qualifying rounds if they are to compete in the group stage of next season’s Europa League, and Rodgers added: “A lot has happened this year which has made the job difficult.

“Last season, when things were working well, we had the support of everyone but performances like today do not help that and I fully understand that.

“The fans deserve an apology. They were angry at half-time – and rightly so – because that was awful, absolutely awful.”