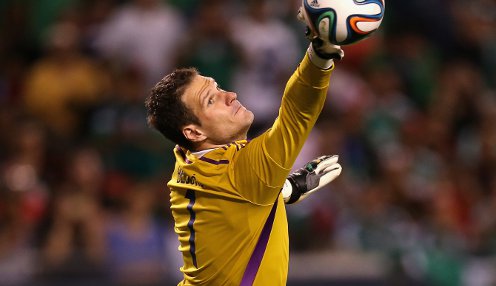 Hughes effectively cleared the way for Bosnia-Herzegovina international Begovic to seal a reported £8million move to the capital when he signed Republic of Ireland veteran Shay Given on a two-year deal on Friday.

The champions are short of senior cover having allowed long-serving goalkeeper Petr Cech to join London rivals Arsenal for £10miillion at the end of last month.

But former Chelsea striker Hughes has said he thinks Begovic is good enough to usurp Belgium stopper Courtois between the sticks.

He told Sky Sports: “I haven’t had an update but my understanding is that he’s likely to travel to Chelsea and that will be concluded.

“Having worked with Asmir, he will back his ability and he would think he will challenge and get game time, or he wouldn’t have gone there.

Hughes also confirmed he is hoping to complete a deal for Liverpool defender Glen Johnson following the 30-year-old England international’s release at Anfield. Johnson spent six years on Merseyside, with his final game for Liverpool coming in the 1-1 Premier League draw at Chelsea in May.

“We are trying to progress as a team, Glen has played at a high level for a very long time and we can benefit from his experience,” he said.

Stoke are in Singapore for the Asia Trophy, where they will face Everton on Wednesday, and are quoted 2.10 to end the season in the top half of the Premier League.